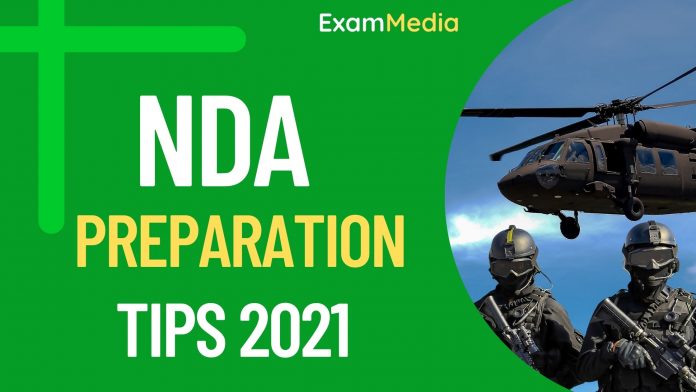 NDA preparation tips 2021 can help you Clear this exam easily. The NDA exam is a nationwide exam. Which is a very important test for 12th and 12th class candidates. This test is one of the most difficult tests after twelfth graduation. The NDA exam is conducted to become a representative in the Navy, Air Force, and Army. This is an entrance test. Through this, the selected candidates are admitted to NDA i.e. National Defense Academy and Naval Academy and ahead studies are done. Here, we have mentioned all the useful information about how to prepare for NDA Exam.

But if you have everything ready, you can prepare a solid plan for the study. If you do this, everything will be well prepared for you during the test. All you need to do is take the initiative and the road ahead will be automatically visible. If you are wondering how to prepare for UPSC NDA, today we are going to tell you how to prepare for NDA.

How to prepare for NDA Exam?

NDA is a national-level examination conducted twice a year. Students seeking guidance and preparation for NDA written examination are advised to follow this article. The full name of NDA is “National Defense Academy”, also known as National Defense Academy in Hindi, where an examination is taken before going to the three popular services of Army, Navy, and Air Force, which we should say. To go to Indian Army, Indian Air Force, Navy but to go to all these services NDA exam is conducted twice a year and it conducts UPSC, but there will be some problem to sit in this exam i.e. Eligibility Criteria, let us know what is required to sit in this exam and NDA 2021 preparation tips.

Here are some important preparation tips and tricks to clear the NDA exam:

1. Focus on your goal, and start preparing for the exam without wasting time, this effort will give you an edge over other candidates.

2. Understand the syllabus well and make a regular routine so that you can cover all the topics.

4. To improve your English, for this you can start reading English daily newspapers and listening to the news, and revise your grammar skills.

6. To know the NDA Exam Pattern and your hopes, study the last few papers, for this, solve the previous year’s question papers.

7. Identify your weak subjects, and start working on them, so that your weak side can become stronger.

8. Prepare yourself to remain calm in the examination hall and answer the questions within the stipulated time.

9. There will be negative marking, try to prepare yourself in such a way that there is no need to make any guesses in the question paper, answer the same question about which you are confident. Do not try to kill you.

10. Spend time to understand yourself in your weak area, and try to strengthen yourself in that area.

11. Make a timetable, and divide the subjects to study at different times, this will also make your preparation good and by preparing according to the timetable, you will also be disciplined.

12. Last but not least, be confident of getting good marks, think like an officer, and be confident.

For Army Wing of National Defense Academy: 12th class pass or equivalent examination of 10 + 2 pattern of school education conducted by State Board of Education or University.

For Air Force and Naval Wing of National Defense Academy and 10 + 2 Cadet Entry Scheme: Physics & Mathematics 12th class of 10 + 2 pattern of school education conducted by State Board of Education or University
Minimum age 16.5 years to 19.5 years

Candidates with the above qualifications can take part in the NDA entrance examination. The How to prepare for NDA Exam is a combined exam for recruitment in the Army, Air Force, and Navy. Candidates are selected through written tests and interviews.

Before joining NDA, you should pass 12th, also remember science subjects. Then as soon as you pass the tenth, you have to choose the subject of Mathematics and Physics in the eleventh science. If you want to join the army, then you have to pass 12th in any discipline.

If you want to join the Navy or Air Force, then you have to pass 12th Physics and Mathematics subject, you can pass with 60% marks as soon as possible. Or if you can fill the NDA entrance exam form and take the exam before the final exams of class XII, then these exams are conducted by the UPSC every year, which happens twice a year.

It is in April and September and its forms are published in June and December every year. Then you can go to the UPSC website and fill the online form, after clearing the NDA entrance exam, now your SSB (SSB) interview round is called.

There are many types of exams like a physical exam, APT test, group discussion, personal interview, etc. There are many tests, all of which you need to clear. After completing all the tests, you are sent to training for the position that you have chosen according to the post.

Important topics for the NDA exam

According to the NDA syllabus, the question in mathematics is to test the calculative skills of a candidate. The standard in question is basically at the tenth, 11th, and 12th class levels. For the Mathematics section, candidates can prepare the following subjects.

The syllabus of the written examination of NDA is similar to the syllabus of CBSE 10 + 2. Maths paper in NDA asks 120 questions. Those get 2:30 hours to solve. So 150 questions are asked in the GAT paper. This paper is also for 2:30 hours. Both papers are in offline medium ie pen and paper mode.